Morning Party People,
I'd like to talk to you about a touchy subject today, I want to talk about memes. For those who might not know what those are it's a picture with a funny tagline attached to it. An Example would be a kitten doing something adorable with the caption reading something to the effect of Ron Paul 2012.
Over the past few days I've seen an emergence of angry memes flooding the net concerning everything to....well no, they've all been about guns. Pro/Con it doesn't matter, all of FB has been taken over about the gun debate. Now I know debates tend to get ugly seeing as most people forget that there's a middle ground to most arguments.
I think what is upsetting me about all of this is that we just finished an election cycle and for a few weeks we had a peaceful meme climate on the net. It was nothing but cats and more cats doing funny shit. Now we have gone from sympathy memes to anger memes, to Jesus Memes and now to the fuck you for not loving Jesus and Guns Memes.
"So what? You saying I can't use my right to free speech commie?"
Nope, I'm saying this :You're not using your free speech, you're using your "like"-"Share" buttons. The guy who made the meme is using his free speech, you're just riding on someones intellectual coattails. You want to be a real American? You want to use your freedom? Might I suggest writing a blog like this one (only better).
"Hey what if no one reads it?"
I can't promise people will, but I can tell you there's a strong sense of accomplishment that goes with finishing every blog post. Kind of like that feeling you used to get when finishing your homework back in high school.
"Can I put pics of kittens on it?"
Yes if you must.
"Can it be of a kitten and a gun?" 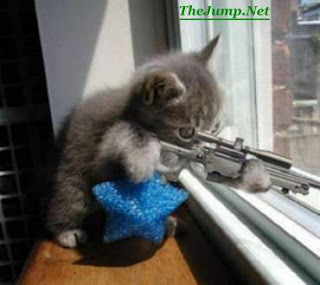 Yes, because that pic is adorable!
It's just an idea guys but I think we move into dangerous territory as a nation when we try to make our philosophy into a slogan. Your way of thinking is much deeper than that, so are your thoughts and ideas, so why should are disagreements be any different? I say write them out and post them and see what happens. Your argument might not hold water but if you gain some enlightenment through the process I'd call that a win, wouldn't you?

Till next time Party People,
Keep on a Chooglin!
Posted by DisJointed Dave at 8:29 AM