Another First Step Forward, Another Step Further from Home

As I write this, it's 9:34 PM on a Monday here in Denver Colorado. I was planning to take a day off tomorrow but the gods of the Day Job have summoned me once again to be at work at 7 in the morning. I half expected it as I was trying to work my Restaurant Magic to summon business.

This morning I had to go to Sam's Club to pick up some supplies for work. As I was walking past the gift section I saw a Yamaha Keyboard with a stand for a decent price. I've felt impulse buys before but something told me I had to get this as opposed to me really wanting it. Was it an impulse to spend? Was I trying to feel fulfilled via a new toy? 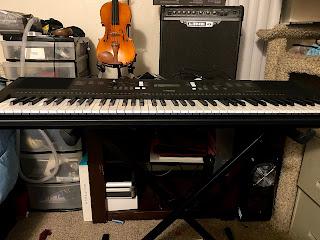 I've felt that many times before but this time there was no rush, no euphoria, just a feeling of completion. Like this was a step I have been needing to take for quite sometime. I've felt for awhile that my fear or singing in public has been a weak spot in my armor for a long time. I think it was because it was the first time I had failed in front of a crowd before. It was like sparring for the first time, that moment of terror when one realizes that they're not naturally gifted, that this won't come easy.

The sounds like a reasonable fear right? My problem was I wasn't used to that feeling when it happened. I was gifted at a fairly decent amount of things so the thought of me not being "good enough" never entered my mind. That's a dangerous place to be. Now I've failed before but when I do it's due to me not performing up to my skill level, which I know. When it comes to singing and music, I have no idea where my level is. So there is fear. A fear that even if I devote myself to music, that I still won't be any good, I won't be special.

Silly fear right? It is, if I look at it with reason. However, fear isn't always based in reason and as such, reason isn't always the best tool to undo this knot. In this case, the tool I must use is knowledge. I have to follow this path to see where the end is. I must know if I have anything to offer in this art. If I find out that I don't, at least I'll know and fear will have no power. If I find I have some talent but nothing "great", then at least I'll know. If I find I have the same energy in my acting and stand-up as I would in music, then I'll know.

So now I have this new tool in the Studio, which looks more like a studio than a bedroom with a computer in it. I'm happy with my choices, I'm happy with my life. At least for today I am, that's good enough for the time being. Tomorrow I will take a step creatively in another direction, should be an interesting journey.

Till Next Time Party People,

Posted by DisJointed Dave at 8:54 PM